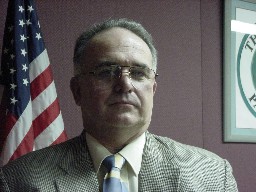 Commissioner Brian Williams was born in Winchester, Virginia and moved to Manatee County as a young child. He is a proud fourth-generation resident of Manatee County.

Brian earned an Associate of Arts Degree in Business from Manatee Junior College. He served in the United States Air Force for 4 ½ years and is a Vietnam Veteran.

Commissioner Williams is a member of Disabled American Veterans (DAV), Veterans of Foreign Wars (VFW), Masonic Lodge, and he is a past vice-president of the Manatee County Children’s Services Board, which he served on for three years. He has volunteered at the First United Methodist Food Pantry for the past 9 years. He is a life member of the Palmetto Historical Society, and he is proud to serve as a director on the Manatee River Fair Association Board. He is a past member of the City’s Code Enforcement Board, having served for three years prior to being elected to the Palmetto City Commission.

Commissioner Williams is the City’s liaison, and has served as President and Vice President in the past, and is currently serving as Treasurer for the ManaSota League of Cities. He was recently certified as a Florida Redevelopment Association – Redevelopment Professional (FRA – RP). Commissioner Williams is currently District 10 Director to the Florida League of Cities.

He has served on the Palmetto City Commission since being elected in 1992 and has served as Vice Mayor of the Commission for seven of those years.

Commissioner Williams loves this community and has long been an active and concerned citizen. He feels honored to serve on the Commission and believes his role is to listen well and respond to the needs and concerns of all taxpayers and residents of Palmetto.